Why train your gundog in southwest Georgia

It was late afternoon on a still cool spring day at Dog Pond Kennels in Beachton, Georgia, a short drive from Thomasville. At the top of the hill, overlooking a training pond, Laurie Williams and her son Travis were working two black Labs. Four more were sitting at attention about 20 feet away, patiently waiting their turn. Most were smaller-size retrievers and while they turned briefly to acknowledge a visitor, they didn’t bark or move, and quickly went back to studying the performance of their fellow canine.

When one of the working dogs returned, he looked up at the trainer, met her eyes and delivered a fresh-killed duck to her hand. He then moved back into heel position by her right leg and sat, waiting for the next command.

Southwest Georgia is retriever country and if you’ve got a gundog, there’s no excuse for not developing his or her full potential. Boston and Thomasville are especially known for its training sites. Dan Crocker, broker with Crocker Realty, Inc., says, “If you go out on Google Earth and zoom in, you can see the properties. They’re not like normal ponds, you’ll have these weird fingers and outcroppings. That will tell you it’s a training pond.”

Crocker says trainers from all over the country winter here and connect with other trainers. They like to cross train in different environments, so they pool their resources. Some of the best bred and best trained retrievers are right here in southwest Georgia. “You’ve got your Major League Baseball players with dogs, high profile clients that pay big money for dogs that get trained here,” Crocker says.

He sold a 520-acre tract in Boston in 2015 that the owner converted into a top-notch training site, and in 2017 it was used to host the National Retriever Club Championship. That’s like the Olympics for retriever training.

Year round trainers who make their home here work closely with visiting trainers, which adds to the expertise of board-and-train kennels. And these are more accessible for hunters in this region. Kennels frequently host local clubs and small group of owners who need a good training environment to work their dogs.

Laurie Williams’ Dog Pond Kennels provides gundog training for retrievers and spaniels as well as AKC and UKC hunt test training and handling. She also trains upland gundogs and companion dogs. Williams doesn’t want to limit herself to a particular breed, “There are just too many really great dogs out there,” she says.

Williams cultivated her appreciation for discipline and practice working with horses in dressage. She applied that same passion to training her personal dogs for competition and had so much fun and success, she decided to help others bring out the best in their dogs. Laurie and her husband Glen Williams, a builder, purchased an overgrown cow farm just south of Thomasville in 2013 and got serious about it. They transformed the property with state-of-the-art kennels, technical training pond and two homes. Laurie and their son Travis do the training and manage the kennels. It’s become quite a gathering place for dog lovers, especially on weekends. In 2016, they were one of the training grounds for the Master Amateur Retrievers Club and they’re scheduled again for 2019.

Training your gundog doesn’t have to be complicated, but it does take consistency. “Everything starts with obedience,” Williams says. “You’ve got to have obedience to have them turn around and do what you need.” We’re talking leash work, sit, stay. Not jumping on people. Come when called. Once the dog has the basics of obedience, Williams begins adding layers—from field retrieve to platform retrieve and boat retrieve.

The next dog was about thirty yards out and using his nose to guide him. When he heard a whistle, he popped up to look for a command from Travis. The look was a question, “Which way am I supposed to go?” Travis signaled farther out, then right.

When the Lab returned, he dropped another fresh-killed duck, then returned to his obedience position by Travis’ leg, ready for his next assignment.

The performance of these dogs might seem exceptional, but every dog has potential, Williams says, and working with a trainer often helps owners to realize what they’ve got.

Kevin Touchton had his dog trained by the Williams at Dog Pond Kennels. “Before I took mine over there, I thought he was the stupidest dog in the world,” he says. He’d hunted with other dogs before and trained, but Buddy, a yellow Lab, just seemed like a lost cause.

The dog was about a year old when he arrived for training and soon Williams assured Touchton that he had a really special dog. When he went out to see Buddy work, he couldn’t believe it was the same animal.

And Buddy has continued to impress. Touchton and his family live on 260 acres and he wanted a yard dog around the house and one that could hunt. Buddy absolutely loves the retrieve—dove and duck. “When we get up in the mornings, he’s literally shaking, he’s so excited. He wants to impress.”

Out in the duck blind, Buddy gets it; he knows what he’s there for. “It’s almost like business to him, he doesn’t play around.” Touchton laughs, “Buddy will actually tell on the birds. I’ll see him looking up, and he’s like, ‘Wake up, fool!’”

The 98-pounder has also been a great family dog. Touchton’s youngest is 11 years old and he has four granddaughters under the age of 10 and a 15-month grandson who are around the dog. “Other than him being so big and knocking them over, I have zero worries.”

Buddy’s now over three years old and he’s about to get a little sister. Touchton has another Lab coming from a breeder that Laurie Williams recommended in Pennsylvania. He’s 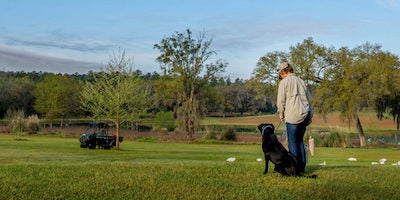 getting a black Lab this time and hopes to use her to keep his family supplied with good hunting dogs.

A little after noon on a Wednesday, Caleb Horton had just come out of the field. He owns Southern Tradition Kennels in Bronwood, Georgia and trains year round, from about 7:30 am to 6:30 pm. He doesn’t even take a lunch break. From the sound of his voice, his work is all the nourishment he needs.

Horton is a certified history teacher and comes from a family of educators; it’s a profession he thought he would follow. But after working with competitive dogs in Canada and southwest Georgia, he decided to make that his life’s work, instead. He trains on about 1,600 acres with a 260-acre lake. The training grounds are protected by a high fence.

Horton trains gundogs for dove, duck and upland hunting. He also trains detection dogs for law enforcement. He takes all breeds for hunting, including pointers and setters, and says for some reason this year shorthairs are booming. He had a kennel full of 35 dogs of various breeds in training when we caught up with him earlier this spring.

The dogs are usually six or seven months old when he gets them. They stay three months and owners come two or three times to train with their dog before they go home. The majority of his gundogs are not for competition, as most of his owners are weekend warriors. They’ll hunt in season but are companion dogs the rest of the time. “They have to come when called, stand still and come back with the bird,” Horton says. “Nothing else exciting in their life, except maybe chasing a cat.”

People often ask Horton, “What’s your training method?” He says just like people, every dog is different. One may be lacking confidence while the other is shining with confidence—but he’s not paying one bit of attention to you.” Horton has to read each dog and determine the best training approach.

“I do the three T’s:  teach, train and test.” He teaches basic obedience using a leash, first, and doesn’t introduce an e-collar until they have that part down. “The ‘burn and learn’ method is archaic,” he says. “Dogs don’t understand our language; you’ve got to teach want you want, first.”

Laurie Williams says the way she looks at it is she’s teaching the dogs how to participate in their sport. She’s teaching them the rules, so they can be a success. “It’s sad when you find a dog that doesn’t love their game,” she says. That’s often the result of training methods that didn’t fit their sensitivities or strengths. “You’ve got to figure out which correction works the best with a dog for your dreams to come true.” Some respond to e-collar correction, while the same training method can make another neurotic. Like Horton, she also takes time to get to know the dog and determine what works.

While some people sign up their puppies for gundog training, Williams says many dogs arrive because they’re exhibiting a behavior that the owner can’t fix. For example, she had an owner coming to see her from Atlanta because his four-month-old German Shorthaired was gun shy. He shot over her the first time and she ran for cover. Williams worked with the dog and within thirty days, she had reversed the response. Williams was able to shoot over her without upsetting the dog’s concentration to mark the bird.

Most trainers welcome owners to watch training and better understand what a dog can do. Once you’re associated with a trainer, you and the dog are like family. Many owners bring their dogs back for board-and-train tune-ups or to meet other dog owners at the trainer’s site on weekends. Group gatherings are especially helpful because they simulate a hunt. With each outing, you don’t know what you’re getting yourself and your dog into; it’s not predictable. It’s the same on a hunt. There could be another dog that’s a distraction, a chaotic environment, encounters with wild animals—snakes. By working your dog around other dogs and changing environments, you’re strengthening their skills and yours.

You’ll also have a better idea of what you’re bringing to the dove field or duck pond. Observes Crocker, “If you bring a dog that doesn’t mind to a hunt, you’ll be looking a long time for another invitation to come in the mailbox.”