Tale of a Special Dog 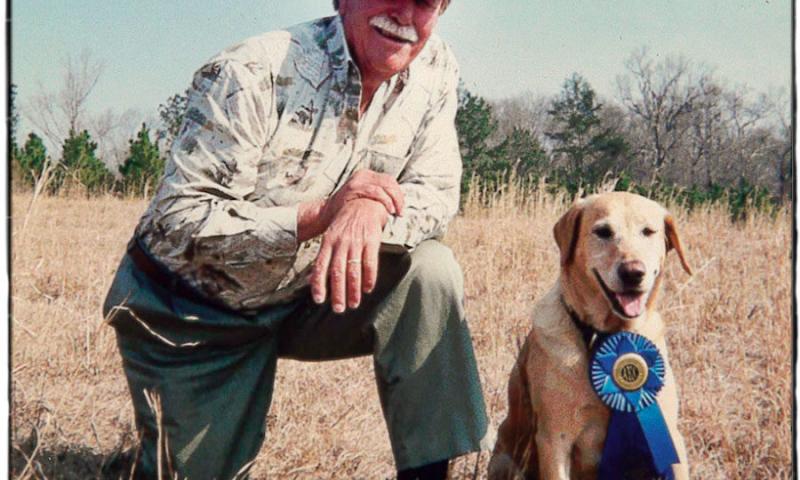 When Wayne Dodson was looking to get a hunting dog, he did his homework and found a breeder with a good reputation in Illinois. In August of 1999, he and his wife drove 13 hours to pick up the yellow Lab puppy, who was the last in a litter of seven. But when they arrived, Dodson started having second thoughts. “That was the ugliest puppy I’ve ever seen in my life,” he says. “She was gangly, wobbly.” He told his wife he wasn’t going to take her, but she insisted. “By the time we got home 13 hours later, we bonded,” he says. “And she turned out to be the best dog I ever had.”

They named her “Dr. Copper.” Dodson started training her about an hour or so every afternoon then a couple of hours on weekends. Then he decided to bring Copper to the local hunt test group. She showed such promise, someone suggested Dodson run her in a Derby. He did, and after she won three in a row, he wondered, “What have I got?” He went to see one of the professional trainers who winters in Thomasville and her gift was confirmed. Dodson spent the next seven summers in Wisconsin training Copper. “I called my granddaughter and told her, ‘I’m about to dip into your inheritance.’ She told me, ‘Go ahead, granddaddy.’”

In 2006, Copper won the National Retriever Club Championship when it was held in Weldon Spring, Missouri. Competing nationally wasn’t anything Dodson set out to do. But he has no regrets. “You do it for the love of the dog and the people,” he says. “I’ve met people all over the country I would have never met before. I developed a completely new field of friends.”

The hunt test fits the average hunter so much better than the field trials, he says. The gatherings will make your dog a better dog in the field. “It’s sort of a festive affair. You meet on Saturday morning, drop the tailgate at noon and have a good lunch.” And besides that, you’ll save face. “If you start with a Junior Hunt Test, then Senior, then Master Dog. You can take that dog to anybody’s dove shoot and not be an embarrassment.”

Those tests are like minor league ball, he says. The field trial is major league. Field Trials are very expensive, but pretty much any type of competition can add up. “It’s not for the weak of heart or pocketbook,” Dodson says. “The only money that’s involved is outgoing. You get a ribbon and sometimes a silver plate. That’s it. Oh, and sometimes Purina® will give you a sack of dog food.” If you want to keep it inexpensive, he suggests just running the hunt test and field trials that are closer to home. They’re good for seeing what other dogs can do.

It’s difficult to pick a winner, but if you do your homework you’re increasing the odds, Dodson says. “They’ve got to be fast and accurate. My dog had a high degree of intelligence, that’s one reason she excelled. I tell people the way we won is you’ve got to be in the right place at the right time with the right dog. I could have run her again for 20 years and it might not happen again.”

You’ll get out of a dog what you put into them. “If you’re lazy with training, you’re going to have a lazy dog,” he says. Dodson is between dogs now and when he went on a dove shoot recently, he really missed Copper. “Having a dog just adds another dimension to the hunt.”