Plowing His Own Rows 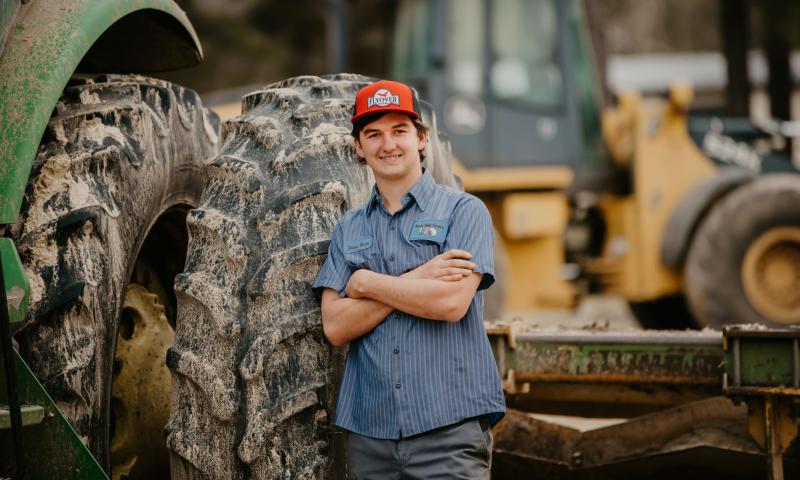 Located in the heart of our Southwest Georgia region, you will find a small town called Damascus in Early County. Situated between this farm and that, the flat, red land and rich soil unfolds for miles. Called home to a population close to 300, it's relatively quiet and undisturbed with the exception of the hums of equipment during harvest season. It's a place where everyone knows everybody and tough times are never met alone. You'll hear words and phrases like generational land, homestead, farmhouse, lineage, heritage, and "Go Warriors!" That is because Damascus also happens to be the destination of Southwest Georgia Academy, a growing and thriving private grade school established in 1970.

If you find yourself around these parts, you also might have the pleasure of meeting a personality seemingly from yesteryears. Storm Tabb of Kevin Tabb Farms is a seventeen-year-old High School Senior at Southwest Georgia Academy with plans to grow his roots a little deeper in his small town. And he's made quite the name for himself, too. You see, stories of Storm's work ethic, dedication, honesty, and passion for farming are echoed counties over. "The future of agriculture is bright with Storm Tabb leading the way, said Matthew Burch, Relationship Manager with Southwest Georgia Farm Credit and Board Member at Southwest Georgia Academy. “He is also a kid who values faith and family, lends his ears to his grandfathers, and takes advice from fellow farmers. He’s quite the prodigy"

Most days, Storm wears his work uniform to school. His teachers allow him to step out of the classroom to accept calls from work along with the occasional call from a chemical sales representative. Although studious, Storm does not deny patiently watching the clock til' he can return to business as usual.

"Storm is a unique student who has uncharacteristic skills for a young man," said Adam Benton, a teacher at Southwest Georgia Academy. "He has truly been a pleasure to teach and I just hope he learned a little from me as I have learned a lot from him. He is the perfect definition of a young farmer based solely on his age because, in application, he is as well seasoned as some of the old pros."

Undoubtedly inspired by Storm and the proximity to ag-related business and opportunities, Southwest Georgia Academy is launching its very own Ag program called “Warrior Ag” with the hope of launching its own FFA program in the future.

Wise past his years, Stormi s unafraid to share his plans. He is a fourth-generation farmer ready to accept the challenges and rewards of working alongside family on the farm following graduation. Contently, he recalls the very moment he took his work seriously and definitively set his path in stone. "I was eight years old. I was driving a John Deere 8400 tractor picking peanuts. I thought, I want to do this for the rest of my life. My mind was made up."

Storm is the definition of an old soul. He was casually propped against a tractor tire, discussing the weather, current crop prices, and occasionally jingling the change in his pant pockets. He spoke from experience, walked a straight line, and didn't want for much He is not proud, nor is he without promise. He is just a young man ahead of his time. "I don't do much outside of farming, but farming is what I enjoy. I just work hard and pray every night and try to make my corner of the world a better place."

Storm is the son of Kevin and Charity Tabb. He has an older brother, Kohler, who is also involved in the family business. "I started off in the tractor with my dad. I like to watch him and learn because he learned from my grandad. And if it worked for them, I am sure it will work for me."

Collectively, Owen, Kevin, Kohler, and Storm farm 2,200 acres of cotton, corn, and peanuts and own40 head of cattle.

“One thing that stands out about Storm is that I can tell him what to do and the next morning, he gets it done and then some. Sometimes, he knows what I want before I even ask,” said Storm’s father, Kevin. “Now, he tells his brother and me what to do and where to go. He’s always prepared to take the next step. He loves this.”

When Hurricane Michael devastated the family farm in 2018, it did not scare or turn Storm away from his love for farming. “The hurricane was a hard struggle to go through. It wiped our cotton out, but we overcame it and came back stronger the following year” said Storm.

"My little brother acts like he is 20 or 30 years older than he is”, said Storm’s brother, Kohler. “He puts working on the farm before any other activity. He tried playing football, basketball, and baseball but soon found that it took up too much time and took him away from farming. He wouldn’t have it any other way.”

“I have observed many others in different professions and I know to be successful, you need to love what you do”, said Storm’s Grandfather, Jimmy Dickson. ”Storm loves every aspect of agribusiness. The minute he gets out of school, he is going to the farm. I am proud to brag on my grandson.”

When we draw upon inspiration from past generations as well as aging leaders in the Ag industry, many will ask with fear, "who is going to fill their shoes?" You can now answer, "I know this kid. His name is Storm. And he will take on the hurdles of this trade by such. He is the succession plan. He gives us hope. And his impact on agriculture will be great."