Money really does grow on trees 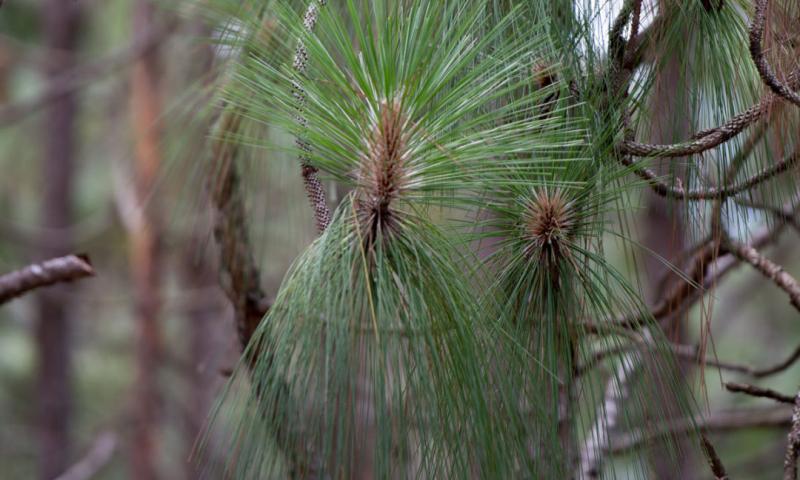 The Longleaf pine successfully colonized the southeast as the glaciers retreated after the last ice age. With its greater strength and pest resistance, along with its ability to thrive with regular, frequent fires, longleaf quickly became dominant over a vast area of close to 92 million acres.

But over the last two centuries, the longleaf pine has been almost completely decimated, covering only three million acres today.

There are two primary causes of this unfortunate result. The mature longleaf pine produces the most valuable wood of all the yellow pine species. This led to continual harvesting over the years which has served a critical role in American history, economy and culture throughout the nineteenth and twentieth century. Throughout that same time period, with little knowledge and research, the longleaf was considered an extremely difficult species to successfully replant. Therefore, over the last two hundred years the longleaf has been harvested for its valuable timber, and the loblolly or slash pine species were replanted in its place. The longleaf was cut, and a different species was replanted.

There is now hope for the longleaf to not only survive but also to thrive once again. Interest in longleaf among landowners and managers is at its highest point in decades. Thanks to people like Dr. David Dickens, Professor, Forest Productivity at the Warnell School of Forestry & Natural Resources at the University of Georgia, and groups such as the Long Leaf Alliance, there is now enough research and knowledge available for landowners to overcome many of the early challenges that made replanting longleaf a challenging or risky endeavor. For a landowner today, if planned and managed properly, the longleaf is without a doubt the best and most economical pine species to plant. Here are a few things you need to know as a landowner to determine whether or not the longleaf is the right tree for you.

How do you plant a successful stand of longleaf?

For years, planting a successful stand of long leaf was vastly misunderstood and therefore the biggest deterrent for landowners. Thankfully, higher quality seedlings and increased knowledge about the role of competing vegetation and the development of selective herbicides to control it have taken much of the risk out of planting longleaf. The three steps to creating a successful stand of longleaf include:

What are the risks in planting longleaf?

The longleaf is actually the most resistant pine species to diseases, insect attacks and is extremely fire tolerant. Therefore, the longleaf, if planned and managed properly, is less risky than the other species.

How fast does a longleaf grow?

Thanks to recent developments in planting longleaf, we have discovered that the longleaf is not slow to grow, it’s just slow to start. The longleaf is like the tortoise in the famous story of “The tortoise and the hare.” It might be slow out of the gate, but the longleaf will catch up and pass the other species given enough time. Depending on a number of factors, if planned and managed properly, the longleaf will usually pass the other pine species in 12-15 years on poor sites and 25-30 years on average sites.

How valuable is longleaf wood?

The wood from a longleaf is heavier than that of other pine species. Since wood is sold on a per ton basis, more money is paid for longleaf for a given volume. Longleaf pine also produces poles, which is the highest valued timber product. By age 40-50, half of all longleaf will typically meet the utility pole standard versus loblolly which typically contains less than 15% poles. In one study 72% of longleaf were pole quality trees.

How much money can you expect from longleaf pine straw?

If you pick the right pine straw company and work with them to produce the right management plan, you can expect to realize over 20 years of annual pine straw income starting as early as age 8. There are several different ways to structure a lease depending on the landowner preference and you should expect a minimum of $100 per acre per year once production begins. All while your trees are growing timber value!

When do you need to start planning for pine straw?

Future pine straw production needs to be part of your initial plan even before you plant the trees. With mechanical innovations in the pine straw industry, it is critical that the trees are planted with appropriate spacing. It is also critical to start working with the right pine straw company years in advance of the first harvest to remove volunteer trees and invasive species from the stand. If you wait too long to prepare a stand for pine straw production it may be too late when the straw is ready.

What liabilities are associated with pine straw production? It is critical that you work with a reputable pine straw company that has the appropriate liability and workers comp insurance. We also recommend a real management plan and a professionally written contract that promotes long term alignment between the pine straw harvester and the landowner. A professional contract needs to include a detailed schedule of prep work that will take place years before the first harvest as well as other important details such as road usage, trash removal etc. We also promote full transparency with landowners. As long as both parties are properly aligned, everyone should be working together to increase the long term health of the pine trees and associated pine straw production.

Warren Buffett says, “Remember that someone is sitting in the shade today because someone planted a tree a long time ago.”

Longleaf timberland is a great asset that can be enjoyed recreationally while also producing fantastic financial returns.
At Swift Straw, we are working with land owners to lease existing longleaf stands and helping them manage those stands for long term pine straw production. We are also working with landowners on the front end as they begin making plans for this lucrative investment opportunity. If there is anything we can do to help you as a landowner optimize existing longleaf stands or help you prepare longleaf for the future please let us know. We are so excited to be a part of restoring the longleaf pine back to its position as the dominant species of southern pine in America.

So the next time someone says that money doesn’t grow on trees, tell them that the longleaf is coming back!

Matt Lowe is the CEO of Swift Straw, the largest pine straw distributor in the country. Based in Atlanta, the company has facilities in six states, and ships pine straw all over the country.