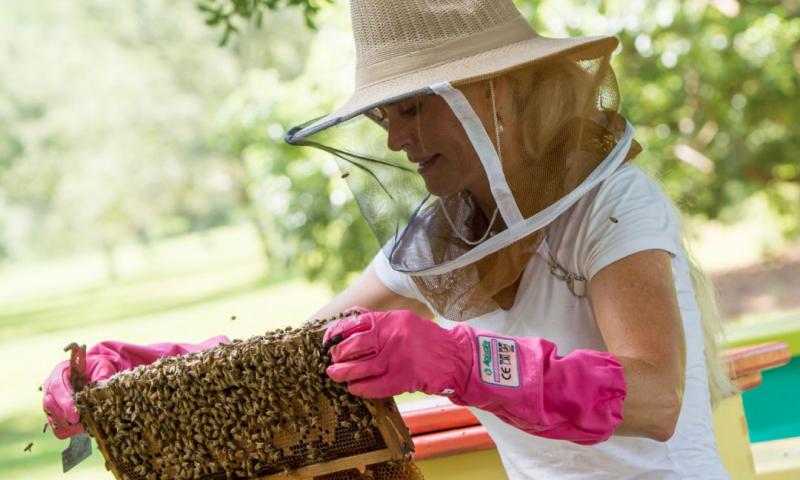 When you first look at the frame that Holly Harrison is holding out in front of her, it appears to be covered in a layer of coffee beans. As you move closer, she points her gloved finger into the brown mass and you can make out the honeybees—thousands of them—busily carrying out their assignments.

Harrison turns the frame on its side and the mass of bodies seem to drip off the edge. “Oh, look at them holding onto each other,” she says. “It’s like they’re saying, ‘Hold on, I’ve got you!’”

The marvel in Harrison’s voice is a bit unsettling, considering the blonde-haired, bare armed forty-eight-year-old is surrounded by an army of stinging insects.

Harrison, a middle school teacher in Thomasville, is a member of a growing number of backyard beekeepers. She and her husband, Tom Harrison, first learned of the idea from a family friend, Sherri Hicks Kraeft, during their once a year covered dish family reunions.

“It’s definitely been a learning curve for both of us,” Tom says. “But Holly jumped right in.”

A CPA and partner with Lanigan & Associates in Thomasville, and a member of the Board of Directors at Southwest Georgia Farm Credit, Tom Harrison tends to approach things a little more cautiously. “I’m more of a realist, I grew up on a farm,” he says. Because honeybees are raised and managed by beekeepers to make honey or pollinate crops, it’s an agricultural animal in the same way that pigs and cattle are, he reasons. “I know what animal husbandry looks like,” he says. And it’s not an easy job.

Still, he appreciated his wife’s enthusiasm and supports her, even when it’s physically painful. Like the time he was helping in the hives and didn’t wear the right gloves. He was stung so many times, both hands swelled up. His wife dispensed Benadryl and took pictures, turning it into a teaching moment.

Holly’s initial immersion in the world of honeybees included joining trade associations and trolling numerous discussion groups on Facebook. She also attended educational sessions offered through the University of Florida’s Honeybee Research and Extension Lab in Gainesville, Florida. Her Apalachee Beekeepers Association mentor Bob Livingston set Harrison up with her first hives. And she’s found other support through nearby beekeeping service providers, such as the Full Moon Apiary in Monticello, Florida (part of the Full Moon Bakery).

Harrison harvests about 150 to 200 pounds (approximately 15 gallons) of honey from her six hives annually. She also uses the wax to make candles. So far, Harrison hasn’t sold anything, preferring to give her bee products as gifts instead.

“My goal was never to harvest honey,” she says. “It was to pollinate—to help the environment.” Honeybees play a vital role in the ecosystem, pollinating flowering plants, she says. The environment needs pollinators and by keeping bees, she feels she’s doing her part.

Six tropical-colored boxes are lined up in a shade of oaks next to Harrison’s home—lime green, tangerine, cornflower, aquamarine— and all are numbered. Harrison is wearing
a wide brimmed hat with netting draped over her face, called a bee veil. She’s also donned pink, elbow length gloves, but otherwise has no protection over her t-shirt and blue jeans.

Harrison looks down and sees a bee on her upper arm. “They’re hanging out with me,” she says, smiling. When another pauses a little too long on her elbow, she doesn’t flinch, but looks at it intently, then volunteers that she’s being stung.

“I hate it when they do that because I know they’re going to die,” she says, a tinge of sadness in her voice. The stinger penetrates and remains in the bee’s target and when it flies away, part of its insides remain also, killing it.

Harrison says she still feels a sting, but it’s not painful and doesn’t itch afterwards. She used to get a welt at the site, but doesn’t any longer. And she’s grateful for the stinger’s medicinal effects, including triggering healing for many health conditions (apitherapy).

As the bee departs, Harrison points to her arm and notes that the stinger is pulsing, still delivering venom. “You know, I did have a little tennis elbow, and she stung me right where I want it.”

Getting started as a beekeeper took some trial and error and some lessons were more painful than others. One day her teenage sons were watching as Harrison worked with the bees. Something got the insects riled and that’s when she realized she hadn’t cinched up her bee suit and some of the bees were trapped inside.

“I was running through the pasture, dropping and rolling, trying to get the bees to stop stinging me,” she says. The boys were laughing and one of her son’s videotaped the whole ordeal using Harrison’s cell phone. “They seemed to like watching Mom get stung,” she says.

At one point, Harrison had 16 hives. She sold all but six of them, a number that is much more manageable. Harrison now spends three to four hours at a time about twice a week maintaining the hives. She prefers mornings, but during the school year it’s more likely in the evening after a full day of teaching.

This is where I come to do my thinking. Out here, working with them, talking to them. It’s a way for me to connect spiritually. Being with the bees is my quiet time. They bring me a lot of joy.

Harrison is checking each hive and documenting her findings in a “Happy Thoughts” journal. She first lights what looks like a light-colored cigar, which is actually sage. Smoke curls from the end. “I’m smoking this hive behind me because I need for them to be calm while I work,” she says. Smoke disorients the bees, she explains. It doesn’t hurt them, as long as it’s a nice, cool smoke.

After she’s assured they’re behaving, she turns and says, “Let me see what number three’s all about.”

Harrison lifts the top off of the hive and reaches for a spray bottle in her caddy. She spritzes the bees with a mix of sugar water with a little lemongrass, which she says her bees love. “They think it’s so delicious and it keeps them busy grooming each other.” It’s a way of thanking the bees and gives her time to work.

After the bees are lightly coated, she peers in. “This is a pretty gentle hive, I like that.” She then pokes around the brood box below with her hive tool. “Sorry girls!” she says, as she gently parts the crowds. Harrison locates the queen, then pokes around some more looking for eggs. “She’s laying up a storm,” she says. Satisfied, she puts the hive back together and records the findings in her journal.

A heart for the honeybee

Harrison is passionate about helping people understand the important role bees play in the environment. Because she and her family live in an area surrounded by agriculture properties, she knows pesticides are a given, but advocates use of those that don’t harm honeybees. Any chance she gets, she tries to educate. Her favorite audience is her classroom. She loves to ‘wow’ her students by bringing bees in a sealed portable observation hive.

The bees inspired the name of her family’s homestead—Circle Dance Farm— which is also home to miniature ponies, free roaming chickens and one very loud guinea.

She explains, “The bees are helping me (by providing wax and honey), I’m helping them and they’re helping the environment. It’s a beautiful dance.”

When people meet Holly Harrison and learn that she’s a beekeeper, they usually ask, “How many times have you been stung?” That’s her cue. “I know I can amaze them by talking about honeybees and giving them some great factoids.” Here are some of her favorites: