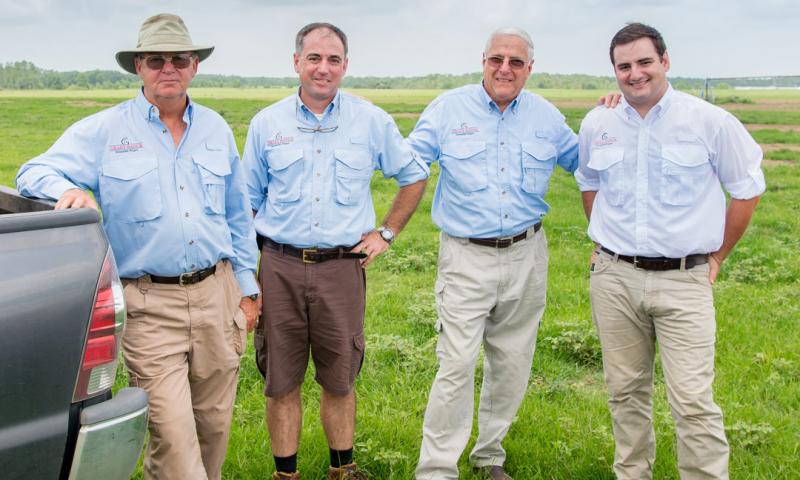 Four men are gathered in the middle of a cow pasture near Whigham, Georgia. It’s midmorning on a Tuesday in early June and Tom, a rescue dog, is nearby. He’s panting heavily, his broad pink tongue a built-in climate control. In the distance, about 250 head of cattle are cooling themselves under a center pivot irrigation system, too, while periodically grazing lazily in the lush green fields surrounding them.

This is Grady Ranch, a 1,000-acre former dairy farm, one of a growing number of grassfed beef producers in the United States. “All of the cattle are bred, born, and raised here on our farm,” says Bobby Holden, the third of the four generations of cattle men gathered on this day. He’s standing next to his son, Ben, who is bringing up the fourth generation in the business. Ben graduated from the University of Georgia this past spring and will be putting his degree in Agriscience and Environmental Systems to work for the family business.

Grady Ranch is one of about 3,900 “finishing grass fed” producers in the United States. According to a 2017 study by the nonprofit Stone Barns Center for Food & Agriculture, only about 3% of the cattle raised for meat are under the grassfed label; the balance are fed grains. Most grassfed operators are small producers like Grady Ranch, which has about 500 head of cattle. But Grady’s operation is also part of an even smaller segment that markets directly to customers under its own brand. They have an established fan base including restaurants, specialty grocers and consumers who frequent farmers’ markets. Only about 19% of grassfed producers in the U.S. attempt such a feat, according to the study. The lion’s share prefer to sell through branded grassfed programs to achieve some economies of scale through mass marketing and distribution.

It started in the dairy case

Grady Ranch’s history reaches back to post World War II. After serving in the Army, Glynn West returned to his family property in Mitchell County and established a dairy farm. He added a second farm in Grady County in the 1970s, where his son Bill West and son-in-law Bob Holden oversaw what became Grady Ranch. Holden says in the early days they specialized in exotic

breeds including Brown Swiss, one of the gentlest of dairy animals. In addition to running the dairy, they were also doing artificial insemination and shipping cattle on cargo planes as far away as Venezuela.

In 1994, Holden’s son Bobby returned to the farm after graduating from the University of Georgia with a degree in Dairy Science. When the elder Holden retired in 2011, Bobby and “Uncle Bill” decided to turn the ranch into a grassfed beef operation. They took advantage of a 1031 Exchange in the sale of the dairy herd and purchased a Black Angus herd.

There were some steep learning curves in the transition, most of it having less to do with livestock and more to do with retailing. Bill’s wife Renee, a retired elementary school teacher, recalls them visiting friends in Atlanta who sold beef at farmers’ markets to better understand how it worked. She is now one of the faces you’ll see under Grady Ranch’s farmers’ market tents. She also works behind the scenes at the ranch, keeping track of inventory, certifications, inspections and all the other required paperwork for a grassfed beef operation.

Bobby’s wife, Catherine, a nurse by training, found her niche within the business. She took a course with UGA’s Small Business Development Center and a course through Georgia Grown Producer Development on Digital Marketing and now manages Grady Ranch’s Facebook page and other social media.

Like all farming family members, Renee and Catherine seem at home with the manual labor, as well. One of their summer projects involved painting the interiors of the former dairy processing plant. Standing amid ladders and drop cloths and gripping an extension pole with a paint roller at the end, Catherine explains that it’s part of a beautification effort to ready their farm for agri-tourism events.

Bill West stands in one of the grazing fields, or paddocks, his hand resting on the tailgate of his white Dodge pickup. He’s dressed in khaki cargos and wearing a wide-brimmed Aussie style hat. West crouches down and runs his hands over some blades of Perennial Peanut grass and talks about how he first experimented with the species by planting a small patch in a corner of his front lawn. His wife Renee noticed their yard suddenly getting greener and they realized it was the Perennial Peanut spreading. The species passed Bill’s test.

West works continually with forage experts at the University of Georgia in Tifton and the University of Florida in Marianna to maintain Grady Ranch’s grazing system. The family conducted intense taste tests in the early days to determine what grasses led to the best flavor meat. They came up with a proprietary blend that includes Bermuda, Bahia, Rye grass, Tift 85, Clover and Perennial Peanut. And they recently added Red River crab grass.

What started as just seven fields in the earliest days has grown to 30 “paddocks,” each ranging from 10 to 20 acres, with a single strand of wire separating them. West explains, “You have to have more grass than you need on any given day.”

What the customer wants

Grady Ranch is catering to a consumer who expects a high degree of quality from their products. They offer:

Distinguishing your product in the marketplace is not easy. It’s a very confusing landscape for consumers with terms such as “natural” and “organic” on labeling, not to mention the USDA’s allowance of partial grassfed claims and a lack of enforcement of production standards for the grassfed label, which can lead to inconsistent quality of meat.

To overcome those challenges, Grady Ranch has capitalized on the “know your grower” trend in food choices. By building relationships with the end-user, Bobby says, “We put a face to the products. It builds their confidence on the quality.”

It’s a Saturday morning in early fall and a Grady Ranch trailer is parked under a shady spot at a busy farmers’ market. There’s a loosely organized line of about seven people in front of a popup canopy, where Bobby Holden and Renee West take turns writing orders and fetching packages from the generator-cooled freezers. They bag the goods, swipe credit cards and collect cash. Occasionally, Renee grabs a blue marker, steps in front of the red-checkered tablecloth, and writes, “Out” on the product listing.

Bill West, on the other side of the tent, has a different persona than the one we met on the farm. The man who was waxing philosophical about grasses in the field is now standing over a hot griddle in t-shirt and shorts, flipping what appear to be bite-size burgers with a plastic gloved hand. He stabs them with a toothpick, piles a few on a red Chinette plate and steps out into the crowds waiter-like to offer his wares.

West bounds out from the tent and approaches a young couple taking turns pushing a double stroller. The young lady looks at the plate, crosses her arms and takes a step back. The man next to her with a close crop beard and baseball cap, leans in closer and gladly accepts a mini burger. West is all hospitality and education. He turns when another woman seems interested in tasting a sample and the baseball cap man nods before they stroll away.

Minutes later, the strolling couple has circled back and they’re studying the white board with cuts of meat in front of the Grady Ranch canopy. When it’s their turn, the young man asks Bobby, “So, what do you recommend?” Bobby smiles, genuinely. “Well, how do you like to cook?” The man says his wife doesn’t eat red meat, but he does. Bobby motions for them to wait and goes to the cooler. He returns with a pound of ground beef and hands it to him. “I tell you what. Give this a try and then come back to see us.” The young man looks at him, then the package, nods and the couple turn and navigate their stroller through the crowds.

“We see divided houses all the time,” Bobby says later. “But quality is our hook.” He expresses confidence that the young man will be back the following Saturday for more.