Just over the horizon, there's nothing but blue... berries! 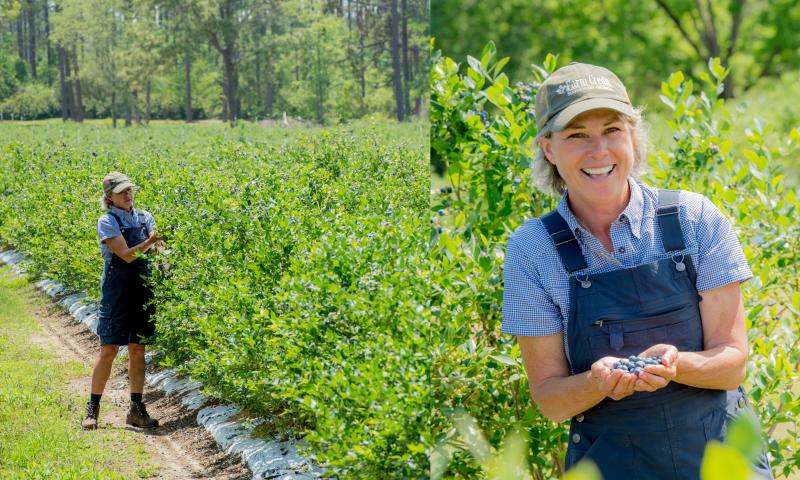 “We’ve had so many blessings in the right moment—at the intersection of need and desperation. I’ve found that over and over again.”

Elaine Mercer’s office is “parked” under a beautiful shade tree on the corner of her 15-acre farm. Her four-wheeled vehicle waits for her to hop in, enjoy a glass of water on what feels like a 100-degree day, and speeds towards the rows and rows of ripening blueberries—a field with four different varieties of Southern High Bush plants. Under the intense summer sun, Elaine counts the days to harvest—it’s close now. Another day or two, and picking the berries will commence and go on for several weeks. From the time they’re picked, the berries land on a grocer’s shelf, not yet washed, but ready to be eaten—the best way, of course, right out of your hand.

Particularly during the harvest season, Elaine Mercer considers her field as a kitchen, with strict adherence to food safety guidelines. She describes her farming operation as both low tech and high tech. And she does it all…the planting, the harvesting, the general maintenance of the field. From her days as an executive at a large commercial bank to her time spent now in her blue overalls, Elaine and her unlikely career path have taught her one of life’s most important lessons: “I can’t be scared,” she says. “I’ve learned that I have to be tough. If something needs to get done, it comes down to me.”

Elaine says she’s a grateful farmer, if not an intentional one. The farm, which her family purchased in 1967, and which she remembers from the time she was in grade school, grew peanuts and corn, tobacco and cotton. Passed to the next generation, she owns the farm with sister Jean Terry and her mother, Montine Webb, but the daily responsibilities fall to Elaine. Not on her…to her, because that’s the way she wanted it. When the sisters considered the return on investment, they decided to pass on cattle and pecans, but instead looked for a higher return on a smaller amount of acreage—and blueberries was the crop of choice. After pooling their resources, and with encouragement from her husband, Elaine walked away from the comforts of corporate life and into her new office—the one complete with a machete and bug spray.

“For me to surrender my sense of independence and ability to provide for myself and my family—to walk away from that was a real scary prospect, a real leap of faith,” she said. “I felt like I was on the high dive—someone was pushing me—and there was no one there to catch me. At some point, I just knew I had to take the next step.”

On any given day, Elaine is checking pH levels, calibrating a sprayer, mowing, spraying, or repairing irrigation lines. During late spring freeze events, Elaine spends her night half-asleep, monitoring the temperatures so that she can turn on the sprinkler system to protect the blueberry flowers from spring freezes. Her learning curve has been steep, but not without guidance or support. “I have learned that the brotherhood of the farming community is essential for my survival,” Elaine said.

This year’s crop was bountiful. Already, Elaine has started planning for her next season; what equipment needs updating; how she can improve her process.

“I can’t lie down at night if I know there’s something (else) I could have done to make this farm work,” she said.