Fires are a part of our past that should be embraced. Before European contact with Native Americans, the indigenous people of the southeast were horticulturists (farmers). They 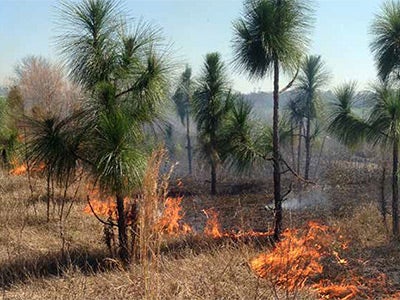 grew maize (corn), squash, beans, sunflowers and pumpkins. By the beginning of the 16th century, Indians had cleared millions of acres for crops and set fires to hundreds of millions of acres annually to improve habitat for game, facilitate travel, reduce insects, pests and vermin, eliminate cover for potential enemies, enhance conditions for berry production, drive game, and for other purposes that improved their overall lives. Extensive areas of forestland in North America, particularly in the South were open and park-like due to Native American Indian caused fires. Early settlers talked of the ease of riding a horse or maneuvering a carriage under the forest canopy and recounted the practice of frequent burning by Indians. Our native longleaf pine ecosystems consisting of warm season grasses, gopher tortoises, red-cockaded woodpeckers and a vast array of other open canopy species all thrived under native people’s propensity to regularly burn the understory of our southern forests (MacCleery 1994).

So you see, as prescribed burning season approaches, it is part of the history of America to renew our forests annually in our time honored tradition of burning the understory of our forests, through controlled fire.

In today’s modern world, there are two types of prescribed burns: Site preparation burning for reforestation, and woods or understory burning.

Site preparation burning is generally performed after a final timber harvest and as part of the reforestation activities. The objective of this burn, which is normally performed in the fall, is to get the fire as hot as possible in order to reduce logging slash and debris. This type of fire exposes bare mineral soil, thereby making it easier to plant seedlings for a new forest. 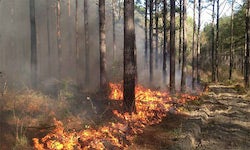 Depending on the primary objective, woods or understory burning (more readily known as prescribed burning) is performed beginning in the winter months and extends into the early summer months. Prescribed fire can benefit a forest on many levels. It protects the crop trees from devastating wildfires by reducing fuel loads, and recycles the nutrients from these fuels back to the soil. Performed and timed correctly, these nutrient influxes can produce results similar to a light fertilizer application. Fire also sets back the natural succession of a stand by controlling unwanted hardwood competition that competes with the crop trees for sunlight, nutrients, and water. A proper fire regime maintains high quality understory herbaceous vegetation, making the stand attractive to many species of wildlife. Fire promotes more palatable legumes and forbs; many of which are high in essential nutrients, and in some cases promotes wiregrass and other native warm season grasses that are aesthetically pleasing and beneficial to many native wildlife species. Prescribed burning on a continuous and balanced rotation also increases beneficial insect populations that are utilized as a food source by wildlife, while decreasing detrimental parasite and disease-causing organism populations. A consistent fire regime implemented over a period of years, can reduce future reforestation costs. Light prescribed burns can improve stand access for hunting and other recreational uses, and create a more appealing, parklike appearance. Research indicates that managed tracts receive higher land and timber prices than those that are unmanaged. When you consider all the benefits it provides, prescribed fire is an incredibly cost-effective and powerful management tool.

The Native American Indians were on to something! With all these benefits, how could prescribed burning not be a major part of your overall natural resource management planning?

Alan W. Emmons is Partner and Treasurer of Southern Forestry Consultants, Inc., a Certified Forester with the Society of American Foresters, a Georgia Registered Forester and Certified Burner in Georgia and Florida. Alan is also an active Realtor, and partner in Southern Forestry Realty. A 1985 graduate of North Carolina State University, he has 30 years of extensive forestry experience, up and down the east coast of the United States. You can contact Alan at (229) 220-1790 or aemmons@southernforestry.net.